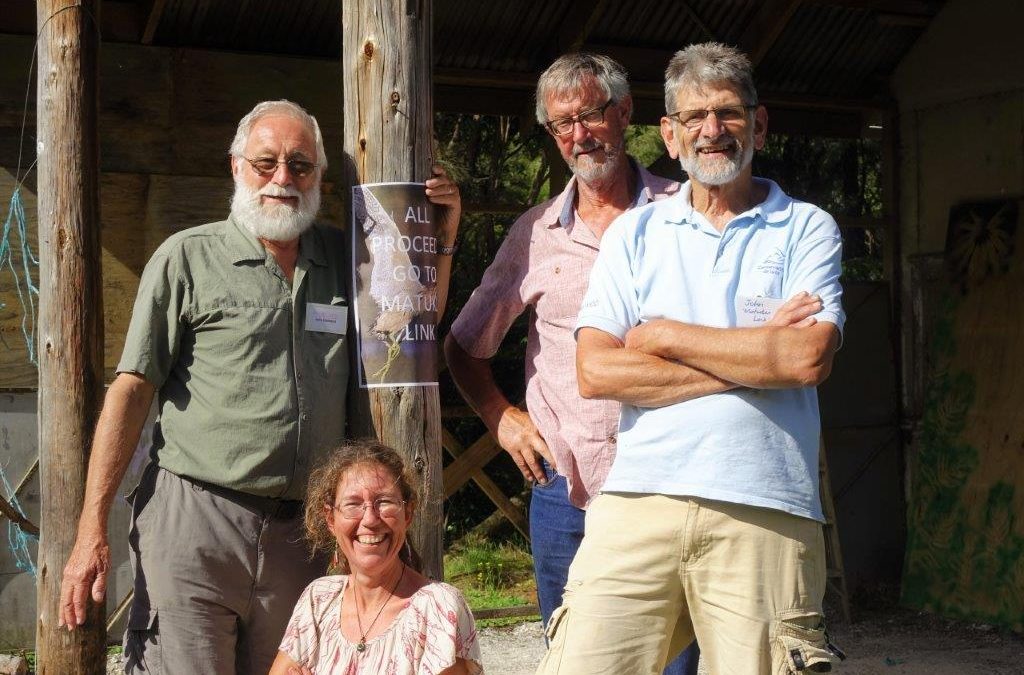 Mortgage free in 3 years, for a $2,040.000 property? The trustees of the Matuku Reserve Trust had it on their wish list, and their wish came true, with the help of many parties along the way. This is the story of an Auckland unicorn…

The story starts over fifteen years ago, with John Staniland and John Sumich approaching the late Henk van Steeden to buy a landlocked piece of land of him to add to the Forest & Bird reserve “Matuku”. He agreed and after much sausage sizzling and fundraising, that block was bought. Henk used some of the proceeds to reroof his house on 111 Bethells Road.

One of the trustees of Matuku Reserve Trust is Geoff Davidson, well known as the founder and owner of Oratia Native Nursery, and less known as a founder and trustee of the Native Forest Restoration Trust (NFRT). In 2005/6 when NFRT was given substantial funding from a donor who requested to use it to purchase ecologically important land within an hour of Auckland. After much searching NFRT recommended the extension of F&B’s 120 hectare Matuku Reserve, by acquisition of the 37 hectare property at 111 Bethells Rd, but when approached Mr Van Steeden declined to sell, but did discuss the idea with his family. When Mr van Steeden past away ten years later in November 2015, his family remembered his support of the idea of selling it to a community group to look after the land and protect it from being subdivided. When approached, his family generously extended the time for the newly formed Matuku Reserve Trust to find the funds for this amazing opportunity to protect a wetland habitat, create a safe link between several conservation projects (Matuku Reserve, Ark in the Park, Habitat te Henga) and with the potential for a wetland education centre, a nursery and an accommodation facility.

Six months of begging, borrowing and fundraising started, and everyone came to the party. First off the blocks was the Native Forest Restoration Trust with the large sum of $450,000, followed by $300,000 from the Nature Heritage Fund, $80,000 from Forest and Bird Waitakere and $30,000 from the Waitakere Ranges Protection Society (WRPS). And this were just the not-for-profits! Individuals and businesses were maybe even more generous: through Givealittle, our own networks and incredible volunteers over $120,000 was raised. The combined total was enough to buy the land with a interest free mortgage provided by the family for the other half of the amount. When the deadline for the mortgage came up, an incredible local business owner and volunteer provided an interest free loan to extend the period for fundraising.

But how could the trust get their hands on the funds to pay off the remaining loan of one million dollars? Right from the start, a couple of smart minds came up with the plan to sell “Transferable Development Rights”. Very simplified, it is like carbon trading: you can sell your rights to subdivide to someone else. This is a seldom used option in the Auckland regional plan to provide the opportunity to protect large land blocks (the “donor site” has to be a minimum size, and of high ecological value, for instance a native bush block) and transferring those rights to the buyer on a donor site which is of low ecological value (in our case a paddock in Rodney). In exchange for selling those “TDR’s”, the donor site will be protected by a covenant, ensuring the best outcome for the environment.

And it sounds quite simple and straightforward, which is probably why our volunteer Vianney Newman-Watt agreed to do the legal work for us for free, as she in her day job she is a partner at Cairns Slane barristers and solicitors. How wrong we were! Almost three years later, hundreds of emails, several surveys, multiple meetings and with help from many more people, we finally got there. Vianney was amazing and never expressed any regret on taking on the job, which obviously was a million times larger then anticipated! Slowly but surely pushed along by the trustees with Chad Wilkie as chair we finally received the email that the trust now fully owns the property at 111 Bethells Road in the last week of August 2019.

Can we rest on our laurels now? Not at all! This is just the first step in the grand plans for Matuku Link. Of course we keep looking after our ecosystem, with trapping and baiting and planting, but we’re also welcoming groups and adding displays in our upgraded barn. In the next couple of years we’d like to add a fully accessible trail through the wetland and bush areas, and start the process of the design and build of a fully Sustainable Wetland Education Centre, with indoor facilities and staff to host and educate groups, researchers and schools as well as have a financial model to keep it all ticking over (a shop, cafe, nursery and co-working spaces spring to mind).

But for now, we’re first going to celebrate this big milestone. Do join us for our Third Anniversary Party on Saturday 2nd of November! Details to come shortly, but we’re working on something really special.

A huge, 2.4 million dollars worth of THANK YOU’s to all of you, all our supporters who gave their time, money and energy so generously to make this happen.

Some of the news articles: