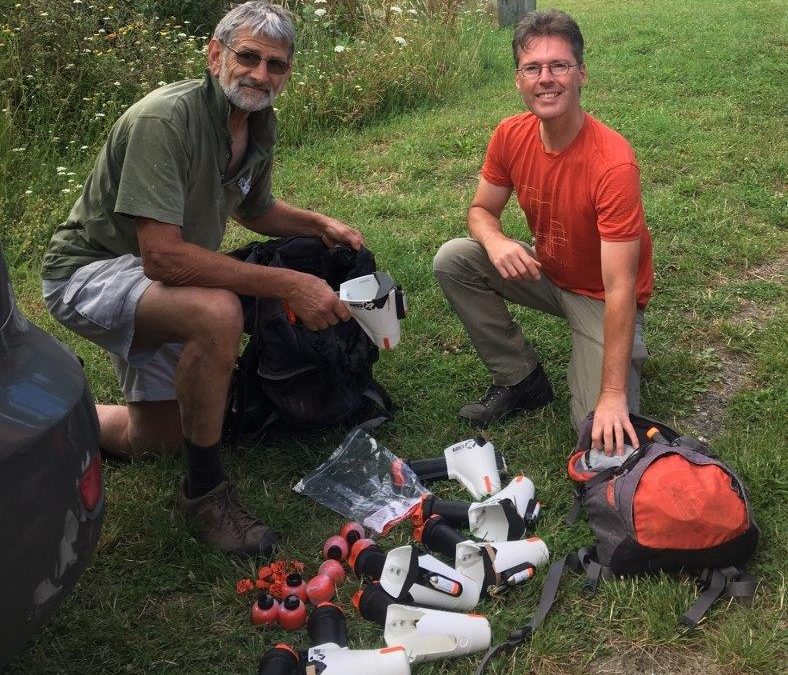 In an effort to control possums, trustee John Sumich and volunteer Anko placed self-resetting GoodNature A12 traps around the northern perimeter. It will help control the possums, as does our baiting regime and other traps we have out there. But having self-resetting traps means we don’t have to check them as often as our “normal” traps.
At the same time, our staunch team of trappers Eric, Ken, Marjolijn, Wayne, Sue and Cliff have been trained and done a couple of rounds of the DOC200 traps. By taking turns, each trap gets checked every second week, bait is kept fresh and attractive and any animals caught (we’re targeting stoats, weasels and rats ) will be removed before they ruin the trap… They look after our traps at Matuku Link as well as our neighbouring Forest & Bird reserve Matuku Reserve, establishing one of our goals: connecting and enhancing the area of predator control by linking up different projects.

Another neighbouring project is Habitat te Henga: the privately owned areas around Te Henga Wetland and Lake Wainamu. Since John Sumich first thought of translocating pateke (brown teal), he enlisted Matt’s help to do the trapping. Three years of trapping of stoats had to precede the translocation of these small endangered ducks. With the stoat numbers down, a translocation of 20 birds was approved. All had transmitter harnesses, and were monitored closely. After 12 months, 18 were still alive and doing well, which is an impressive percentage. The translocation group was so happy with this result, that they agreed to another translocation of 80 birds the following summer of 2017. Of the 20 birds with transmitters, again 18 survived until we stopped monitoring them (the batteries on the transmitters run out, or the harnesses come loose). Of course the trapping continues, thanks to the land owners who allow Matt to access their properties to check, maintain and rebait the traps. Four additional shorter trap lines [one of them of Goodature A24 traps] are maintained by volunteers.

And this year we’ve seen the first pateke ducklings at Matuku Link! As we also have their natural predators, eels, we hope they will survive and increase our pateke population, for their benefit and for ours.  John Sumich and Matt also installed additional self-resetting GoodNature A24 rat traps around part of the wetland, to see if wetland bird numbers increase with extra rat control. We were able to buy these A24’s and their lure and gas canisters, thanks to a grant from the Waitakere Ranges Local Board, for which we, and our pateke, our most grateful.

If you’re interested in learning more about our predator control regime, or even better: would like to join us, we are still looking for people to do a ‘bait line’ four times a year. Some ‘lines’ are quite the workout, others are moderate and we even have a couple of ‘easy’ ones. You can do them during a monthly Working Bee or within a certain period in your own time. Just contact Annalily who coordinates the training and timing for it, on matukulink@gmail.com or 021-2207136.

Thank you to our volunteers and our funders! 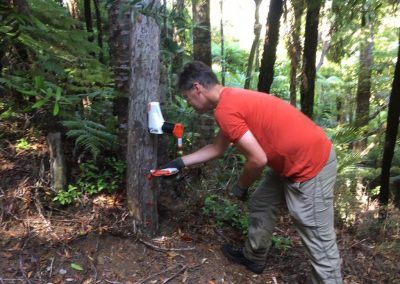 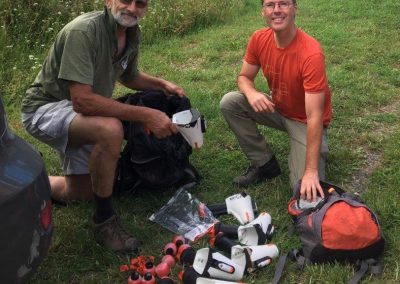 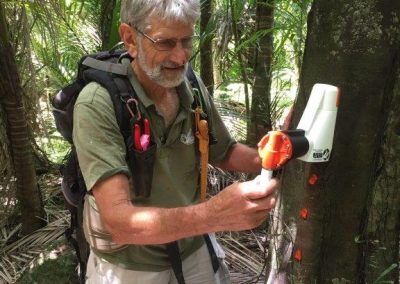 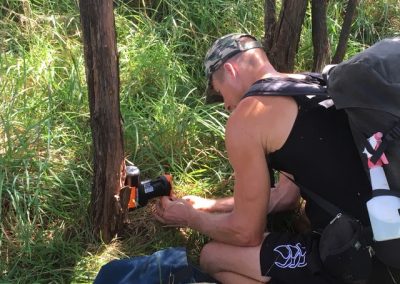