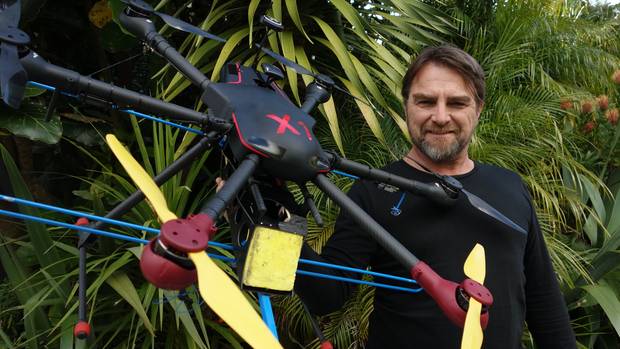 How do we know we’re looking after a very special habitat? Because of the birds that use it! And how do we know who are here? Monitoring and careful observations work well, plus some clever new tools like audio and drone monitoring.

Banded rail used to inhabit te Henga but died out when the fitch farm opposite te Aute Ridge Road West released all the fitches [ferrets] with the collapse of the fitch fur market. However they are possibly back again when this year and last the ecologists monitoring the results of the Salvinia eradication reported detecting them at about the same site in the wetland.  Possibly we might pick them up with the planned audio recordings for bittern late in September.

Bittern were also the target species in a trial that bittern researcher Dr Emma Williams conducted with Philip’s UAV [drone] with its thermal imaging camera. John Sumich, one of our founding trustees, has been trying to get funding for this since he had thought of the possibility for bittern detection three years ago and finally that opportunity came.  The winter solstice, at Pukehina near Whakatane saw him and his team standing freezing their butts off while the UAV flew in the dark both late at night and pre-dawn to try and pick up the thermal image of two transmitter carrying bitterns known to be at that wetland. Many valuable lessons were learned: how low the UAV can go before alarming a bird; how high before the thermal image is lost; and optimum times to detect wildlife. Seeing on a monitoring screen a ferret several hundreds of metres away hunting at night through reed beds was incredible. A Te Henga flight was also done later for more testing.